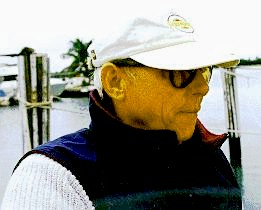 Mark Gardner and Rick Fastiggi braved the Blizzard of 96′ to trailer the boat from Burlington to Key West, some 1900 miles. Although the conditions for the first 800 miles were anything but stellar, things improved around North Carolina and the boat arrived in excellent condition.

Over two hundred boats competed in the five day event. Three separate courses were used for seventeen classes. The larger PHRF fleets put a premium on finding clear air while sailing toward the favored side of the course.

Affectionately known as Big Red, the Dodge 4×4 pick up is powered by a Cummings Turbo Diesel. Powerful enough to pull 7000 pounds up the hills in Pennsylvania, yet give 12 miles per gallon…. in 4 wheel drive!!

Sixty one Melges 24’s made the trip to Key West, about the same as last year. The Melges 24 features a keel that is easily lifted, making transportation and launching simple. This year they were joined by 8 new Melges 30’s that look very similar to the 24.

On the big boat course the newly launched One Design 48 Class leads the way with 4 boats. Made by TPI in Rhode Island, the OD48’s are the newest and hottest machines.

The Mumm 30 and 36 showed their strength by starting twelve in each class. These Boats are made by Caroll Marine in RI and are clearly the next generation of racing machines. If you’re burning to get into the Grand Prix Circuit, the Mumm 36 is the boat. The circuit’s next stop is SORC in Feb., then American YC in April, Belgium and the Netherlands in May, while June features Newport and on to Germany, finishing out the fall in Majorca, France, Chicago and Italy. Interested? Call 410-268-1001.

The racing was well managed by an excellent Race Committee. The windward leeward courses were 5 to 15 miles in length and winds ranged from 8 to 20 knots. Key West, which is noted for its strong winds, featured light to medium breeze with large and sloppy ocean swells. These conditions put a premium on good crew work.

Those who attended Key West Race Week in the past, or those who have heard the stories of the “beer tent”, will be happy to learn that it was even more crowded and even louder than last year. Sponsored by Mount Gay Rum, the tent was the place to be from 1800 to 2000. After the tent many crews were seen at several of the watering holes including Hog’s Breath Saloon, Rick’s and Schooner Warf Bar. Fortunately Key West is a small island and the activities were within close walking distance.

If you are looking for an adventure next winter it’s Key West in January for good racing, and good times. 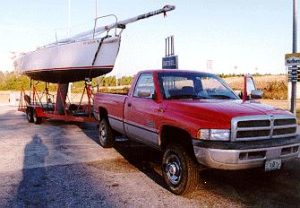