A brief note on Andy’s adventures with the Soling at Miami’s Olympic Class Regatta on the last weekend in January:

I hightailed it outa here on Thursday night as the weatherman warned women and children to stay inside on Friday afternoon because the big, bad snowstorm would cause them to crash into each other should they be so daring as to venture out in it. I met Andy’s foredecker, Andrew (“Drew”) Buttner, in New London, where I parked the car for a week.

Drew was fresh from a day of just thinking about going to Miami; he was really stoked to get going! We finished packing the Tahoe and hit the road at 11:30 p.m.. Despite dire warnings about freezing rain and hazardous conditions, we saw only rain and light traffic. A big bonus about driving in these conditions was that Ma and Pa Kettle had decided to stay home and leave the driving to us. Not many long-haulers, either. 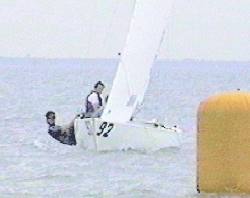 We arrived at Andy Herlihy’s house at 6:30 the next morning; woke him up, packed him in and left an hour later. Arrived outside St. Pete in the evening, where we stayed the night at Drew’s uncle’s house. He is an Andy, too. Andy Haywood. He is a Lightning and Sunfish sailor. Drew’s grandfather was there to see us off as well. He has built several wooden boats and is an enthusiastic supporter of sailing. 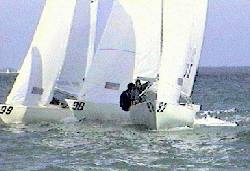 The next morning we met Ed Baird at his house, checked out everything, hooked up the boat, said our good-byes and headed for Miami. The Tahoe pulled the 3,500 lb. load well at the speed limit, and we arrived at Key Biscayne YC in early afternoon after checking in at Coral Reef YC, the regatta’s HQ.

While the snowstorm was giving Vermont about 8 inches of the nasty white stuff, we were trying to figure out how to step the mast without damaging anything or hurting anyone. Luckily, Tony Rey, Ed’s former crewman, and his crew were very helpful and understood our situation perfectly. Ron Rosenberg, their coach, was most helpful on that day and the next, when Drew Buttner was asked to go in place of their ill bowman to test set-ups as Andy Herlihy and I rode in a chase boat, video in hand. Jeff Madrigalli showed us all how to go upwind in a Soling in light air; note one crew in hobbles with the others low in the boat to reduce pitching moment (in flat water?!?!?) to a minimum. reduce pitching

Drew, Andy and I had three days of boat preparation, watching the others do it and sailing ourselves prior to the racing.

(Now, why was this little old bald dude driving the boat? ‘Seems that Andy (“Bob”) Horton had exams and wouldn’t arrive until late the night before the first day of racing. So I was the designated skipper until then. Tough work, but someone had to do it…)

The boat is a real machine. Dennis Conner had its construction supervised by one of his AC people, and it has lots of sails and a few special features. The binnacle had to be moved 1 1/2″ forward to let the Big Guy pass easily between it and the end of the tiller. Even for a little guy, tacking the boat is one of diving under the low boom (it’s two-blocked upwind) and making the 180 degree turn in a crouched position. It was during one of those moves that I lost my glasses to Biscayne Bay.

Gybing the boat is a piece of cake in comparison. The Soling’s mast rocks more than three feet forward, measured at its top, on the down wind leg. The boom is considerably higher as it sweeps the deck. The hull is so full forward that it doesn’t seem to mind a 180 lb. bowman moving before the mast for the gybes. The boat was steady as a church in 15 to 18 kts. in the Bay’s light chop.

Andy and Drew grew more comfortable in their hiking gear. On one upwind leg, Andy was in his “hobbles”, and Drew drooped in his straps; both were down with their butts just above the water and heads barely above the rail. Periodically we were seemingly going through the waves, but otherwise everything was ‘business as usual’. I heard laughing at one point and looked down, only to find the boys playing tic tack toe on the side of the boat between them with the boat’s pencil!!! On the third day, the boys were wondering where they were going to install the cupholders…

By the way, “Hobbles” amount to a line clipped to the center of the boat’s floor extending to a pair of padded cuffs that fit around the leg over the hiking boots and then deadending at the ring on a trapeze harness. The whole affair reminds you of a prisoner’s restraints. In fact, that is a fair comparison, because the hobbled man is tied to the boat and sometimes must be cut away in a knockdown…

The crew “Bob” Horton arrived on schedule, and we briefed him with the videos and all kinds of irrelevant information before he crashed the night before the first race. The next morning, he drove us to the boat early and saw it for the first time.

The race committee enlisted the little bald dude (me) to assist in the Mark Boat, and I was able to video and photograph the mark roundings and hear all the yelling first hand. The boys improved from a 6th to 5th on the first day to a 3rd, where they led two of the four legs light winds , and then settled in to win a 5th overall (of 9 total) just behind the pro’s in the final results. All of that using their worst set of racing sails and their ‘beater’ spinnaker (all taped up and threadbare just like others we know of on Lake Champlain!!)

We packed the boat up on Saturday, dropped “Bob” off at the awards ceremony and began the trip home in late afternoon. Aside from the obligatory blown trailer tire somewhere below the Georgia state line, the trip was uneventful – except, of course, that surprising breakfast at “The Waffle House from Hell”; but that’s another story…

“Bob”, I’m told, made his flight early the next morning (surprise!), and we left the boat in Washington, across the river from Georgetown. The three Buds are now focused on finishing school and then hitching up the rig to attend the Soling districts in Rochester the last week in June.

They’re setting up a website, a non-profit corporation and are looking for sponsors after the Rochester event. So far, Dunkin’ Donuts and Hooters are their first picks, hands down. They can honestly swear by these two sponsors’ ‘goods’ without qualification. (Did I tell you I survived four meals in four days at Hooters? An’ ah’m mighty proud of it, too. ‘Course mah gut didn’ feel so good ‘tween meals, though…)

That’s about it, for now. I’ll keep you up to date as things develop, like it or not!!