The Omnium’s success lies in its appeal to the cruiser-racer. Three divisions including racers using spinnakers, non spinnaker cruising boats and the very successful novice class were included in this years event. The novice class, Class F, is for first time racers who want to experience the fun and pride of racing their sailboat without all of the associated anxiety of competing with the more experienced crews. A seminar was held on Friday night for those new to racing to help them with the in’s and out’s of racing. 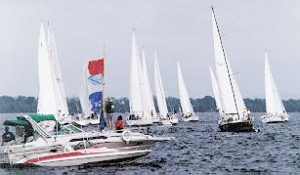 We met Michael Parson at the Plattsburgh Boat Basin around 08:30 Saturday morning. I spent the summer looking at the stern of his J-29 “Witchcraft”, so when Mike called me earlier in the month to ask us to crew I jumped at the chance. After all, the only way I was going to get a good look at how they whooped us this year was first hand.

The plan was for two races each day. The race committee set a 8.3 mile triangle-windward-leeward course in Cumberland Bay. The start line was just outside Plattsburgh Harbor near buoy B1. Class E started first shortly after 10:00, followed by the remaining classes every ten minutes. I’m accustomed to five minutes between classes and I found myself grumbling about the delay between starts. With six classes, it took an hour to get the first race started.

The first leg of the course was a one tack beat, offering little tactical decisions after the start. This further confused me for as a “pure racer” this is less than a spectacular course. I wondered aloud about the race committee’s competence and if the racing would be any fun at all. As it turned out, boy was I wrong!

As each class ahead of us started I began to realize the “genius” in this committee’s planning. By allowing ten minutes between starts, they gave enough time for each class to clear the line before the start of the next class. This gave those not accustomed to crowded starting lines a little leeway in their start strategies.

The one tack beat turned out to be another positive race management decision. It gave each class the opportunity to test out their pointing abilities without the complications of having to tack five or six times to reach the weather mark. The slower classes started first letting them jump out in front without being rolled by the larger boats.

Our start left us just behind the J-105 “Lionheart” skippered by Al Hobart. The tight reach to the first mark off Cumberland head gave us time to sort out our competition. Our spinnaker set at the first mark gave us an easy reach toward the mark just west of Crab Island. As we approached this mark the wind swung to the south and we decide to jibe and reach back toward the start line. Unfortunately the wind was only “kidding” and we did one of those special maneuvers called “put up the jib, take down the spinnaker without telling the crew what we are doing”. A few skinned shins and a small amount of blood later we found ourselves reaching over the slower boats toward the finish line and a shortened course. Thankfully we sustained little damage, and the blood washed off the deck with little trouble.

We finished about four and a half minutes behind “Lionheart” giving us a second place finish for the race. Not bad considering that the difference between the J-105 and the J-29 is 41 seconds per mile. We all congratulated ourselves on not breaking anything and decided to sail around until the next race.

“Oh dear… another surprise……” Everyone was dropping their anchor and are firing up their Bar-B-Q’s for lunch. We checked the schedule and the next race was not until 14:00, making our start slightly less than three hours away….. Since we had already choked down our turkey sandwiches and a beer, we debated if we should go tie up at the dock for a while or just sail around….. the latter being the decision.

Rob McDowell, the helmsman, tactician, and leader of the pack (Woof!) suggested that we try sailing backwards. Starting with the bow into the wind we backwinded the main and began to sail backwards around the anchored boats. After a bit of practice we perfected our backwards jibing and tacking. While sailing through a particularly tightly group of anchored boats we found ourselves deeply involved in a debate about which tack we were on. The general theory was that when you sail backwards starboard becomes port and port becomes starboard. Of course the bow is now the stern and the stern the bow….. We missed judged the anchor scope of one of the boats we were sailing near and just caught their anchor line with the back of the keel, which is now the front of the keel because we are going backwards, and because of this the line did not slip off and we were forced to reverse our course directly into the bow of the anchored boat. A few push-offs, and a quick jump overboard to clear the rudder and we were free from the clutches of the enemy. Oops! Unfortunately I believe several people captured this unique maneuver on film, so denial would be impractical.

As the starting time approached the BBQ’s were closed and the anchors pulled. The happy and well fed fleet was eager to conquer the next race. As we sailed among the different classes waiting for our start we noticed several boats of special interest. The first being “Ken and the Barbies”. It appears “Ken” and his crew of five beautiful blondes (?) in stunning bikinis were in competition with the “Sheiks” with their Arab costumes for the “best dressed crew”. At first I’m a little confused…. but after a few minutes I begin getting the picture, This race was about having fun!…. Duh!

At the start of the next race the wind was still out of the east and we all started on a close reach to the first mark. Sort of a carbon copy of the first race, except for the “special maneuver” at the would-be-jibe mark. This time the race committee let the race run the entire eight miles. In a close finish, Andy Sajor’s Metal Mast 30, “Chaousarou” finished first followed by Ken Signorello’s J-24 “Results” with “Lionheart” third and “Witchcraft” fourth.

As off beat as the racing might have been, the on-shore festivities were right on! First off there was a prize for the middle of the fleet winner for each race. Kind of a lucky draw. And the prize was a neat chocolate fondue set. I heard at least one wife of a racing skipper say that it was the best prize he had ever won – they could actually use it!

That was just the beginning. The Saturday night BBQ was no ordinary burger burn. It was a whole pig roast along with some huge beef roasts. It was a spectacular event. Even the corn on the cob was cooked in milk and then dunked in butter. It was $16 (all you can eat) but I think it often turned out to be more like all two or three could eat. The quality was just super! If that wasn’t enough, the real partying was kicked off by a short but inspiring fireworks display off the break water. Nothing like a huge chrysanthemum burst right overhead!

Then the real fun began. The Naked Turtle was packed! I turned in early but had to get up at 2:00 and found that there were still some hangers on at the Naked Turtle.

Sunday morning greeted us with a steady 10 knot southerly breeze. The starting line was in the same location so we decided to wait until the first class had started before we shoved off. As we approached the starting area, Class C was on their final approach to the start. Unlike yesterday, all the boats were within a few boat lengths of the line, their sails pulled in and moving fast. It appears that the starting line nerves had calmed down and this fleet was ready to race.

“Lionheart” once again bounced into the lead shortly after the start of Class A. We were less than a minute behind at the windward mark but after “Lionheart” set her huge asymmetrical spinnaker, she left every one of us in her dust. “Witchcraft” finished second, ahead of “Zoe” skippered by Francois Brassard.

Once again it was time for our lunch break. We had learned from our previous days mistake of practicing backwards sailing around anchored boats and decided to tie up at the dock for lunch….Duh! We weren’t the only ones. The entire crew aboard “Lionheart” took the time to sample some of the fine food served at the “Turtle”. The only problem I saw with taking a long break between races was it gave time for our idle crew to exercise their youthful enthusiasm. The water balloon fight we started had nothing to do with the fact that “Lionheart” is so damn fast ……honest!

The final race was shortened at the last windward mark in a dying breeze. We tussled with Don Duley’s J-92 “Realescape” the entire race just nipping them at the finish. Don and his son Chris began racing several years ago and have become excellent competition. It is races like the Omnium that give new skippers and crew a chance to learn how to race. As we crossed the finish line, we gathered the remaining water balloons and bombarded “Ken and the Barbies” as our final hurrah of the series. The final event of the day was the awards ceremony. My congratulations to the race committee in sorting out the seventy boats who had raced in the regatta. Over one hundred racers crowded under the tent to cheer each other’s victories. Although most of the announcements were in French there was no language barrier in the smiles and cheers from the crowd.

“Ken and the Barbies” just nosed out the “Sheik” for the best dressed boat while the trophy for best female skipper was awarded to Sylvie Laplante of “L’Envoile I”, with the Best Family Crew award going to Dan Czaja and his crew aboard “Silver Hells II”.

In Class C, Andre Riopel’s “Rafale” was two and a quarter points ahead of Yves Raymond’s “Rhyl” In third place was Elie Haccoun’s “Maubeche”.

In Class E, Dennis Curtin aboard the Ensign 22 “First Fiddle Green” finished ahead of second place “Bluewing” a Nunsuch 22 skippered by Pierre Chevalier. In third was Jacques de Tonnacour sailing his Mirage 24 “Shearwater”.

In the novice Class Sylvia Laplante skippering “L’Envoile I” finished first with Bertrand Raymond aboard “Baraka III” in second. Third place was captured by Sere Coallier and “Giboulee”.

Many thanks to the organizers of the regatta for inviting us to come. The casual, yet competitive atmosphere of the regatta was refreshing as well as fun. If you’ve become disillusioned with the stodgy, “blue blood” style of racing in other areas of the lake, or if you’re just looking for a change of pace, make a note to sign up for next year’s Omnium. These folks know how to have fun!