Frankly I was just a bit hesitant to bring up the subject with my wife. Ya know, most wives don’t care much for sailboat racing. Casting caution to the wind, I jumped in with both feet.

“Dear”, I began , “How many mothers can say they play a sport with their teenage son?” She hesitated, gave me that “ya gotta be kiddin’ look” then realized I was completely serious. Although she knew immediately that I was right, her instincts kept saying I was crazy.

“A Lightning,” she screamed, “No way in hell, they turn over… don’t they?” In the end the lure of “playing as a family” won out over common sense and she agreed to buy the new family toy, Lightning 14050.

Here we are, 47, 47 and 14 years old, trying to accomplish what many have tried to do but only a few have succeeded… race a sailboat as a family Saturday morning, May 30, greeted the fleet of eighteen with a steady 12-18 knots straight out of the north. With air temperature in the mid 70s and the water nearly as warm, it looked to be a perfect day. Seven races were scheduled for Saturday and Sunday and with such beautiful conditions the race committee, headed by Marty Olsen, decided to run five races on Saturday. This turned out to be a wise decision as Sunday’s thunderstorms and tornado warnings sent the fleet heading for home. Fortunately, Saturday’s races were enough to call the regatta a great success.

The courses were short triangles in the Inner Malletts Bay. Twice around with an extra windward leg mixed with the traditional Olympic course; once around, windward, leeward, windward. With such small courses starts were at a premium. Crews who managed to get great starts usually finished in the top of the fleet.
Tim, Bill and Heather 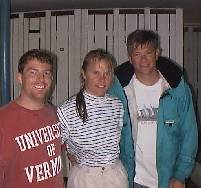 Bill Fastiggi from the Malletts Bay Boat Club edged out Peter Hall from Montreal to take this year’s regatta. Bill and his crew Heather Roe and Tim Ambrose sailed to a sixth place overall in the Lightning Southern Circuit this past winter.

Now, I’ve been helping run Lightning races every year since 1982, but this was only the second time I’ve actually sailed in one. Having grown up sailing small boats, I was excited to try my hand at a Lightning, but with a “new to Lightnings” crew I was somewhat apprehensive about the outcome.

The first start was a general recall. The entire fleet was over early. We had a great start on the next attempt and discovered that our boat speed was actually very good. We were “hanging with the big boys” without a problem. Around the first windward mark we were in sixth or seventh place – well beyond our wildest expectations… Except it turns out that we needed a non-spinnaker class certification, because before the jibe mark we had slipped to sixteenth… OUCH!

The conversation aboard our Lightning was very interesting… . Upwind the words, “come on, hike will ya”, got a little louder eveytime we got hit by a puff. During the spinnaker sets I got to practice, “No… pull the other sheet”…. over and over and over… Long discussions about the inappropriateness of swearing at a teenager and his mother, followed by sincere apologies and the promise of, “I’ll try to be more calm dear, honest I will. Just won’t ya please take the spinnaker down now.”

I have to admit; my apprehensive feelings were ill founded. I had the best time racing I’ve had in the past 15 years. Pushin’ those big PHRF boats around the course can be interesting, but face planting a North American Champion on the way to the weather mark was as exciting as it comes. Hell, I’m even getting to like the name of the damn thing “The Big Scream”… Ya gotta love it.