The sixth annual Chiott Marine Challenge was held on Saturday, June 6 in the Burlington Harbor. Thirty boats competed in five classes under the PHRF format. Class B had an excellent turnout with ten boats while Class C had a good showing with eight. The turnout was disappointing in Class A where only four boats made the start. “Peregrine” and “Mohawk Warrior”, both past winners of the event, were missing. The Jib and Main Class only managed to start three boats.

The Jib and Main Class raced a twelve-mile course across the bay to the Four Brothers Islands and returned while the spinnaker classes raced two windward leeward races in the Burlington Harbor. For the fist time in six years the racers were actually greeted by wind. Although the breeze faded somewhat during the first race, it was still enough to complete both races.

For the second year the Lake Champlain Community Sailing Center hosted the race. Dick and Rick Fastiggi served as the race committee for this year’s event. They set a near perfect course just outside the breakwater in a twelve-knot northwest breeze. The cruising class started without problems and began their hike to New York State while Class A prepared
Kimura & Olsen 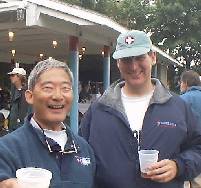 for their start. The rules of sailing were modified to allow for three minute intervals between classes, except between the Main and Jib Class and Class A, which was twelve minutes. Somehow, somewhere, Class A forgot the rules and started six minutes early. Apparently none of the four boats noticed the yellow warning flag as they crossed the starting line. To make things worse, most of Class B started three minutes later. Apparently they did not notice the blue preparatory flag at what they falsely assumed was their start. As Class C approached the line for the Class A start, thinking it was their start, the race committee raised the X flag and sounded the horn three times abandoning the race. Unfortunately the chase/mark boat had no means of recalling the two classes that had started early-engine failure was the culprit. Fortunately, after the boats rounded the windward mark, they headed back towards the race committee and were informed of the abandonment. This clearly demonstrates that although the starting sequence was well written in the race instructions, as well as discussed at the skippers meeting, even experienced racers can make simple mistakes. (Put away those skis and dust the snow off the decks… it’s sailing season!)

The first races finally got off in a clocking northwest breeze. “Lionheart” in Class A jumped into an early lead and held off “Franky Scarlett” for the win. In Class B “Bark Ode” blasted into what seemed an insurmountable lead until the wind clocked to the north and “Full Tilt 2” and “Evoked Potential” used their asymmetrical spinnakers to roll into the lead. Jim Finch and Marcy Milton dusted Class C in “Toads Wild Ride” and finished well ahead of father/son team, consisting of Marcel and Paul Beaudin, sailing “Sonar”. Mike Barker sailing “Wingdam” easily won the Jib and Main Class. Class D had it’s best showing in years with five boats. Alex Nimic, sailing his Pearson 26 “Celerity” easily won both races. This in itself is an impressive event but is enhanced ten fold when you consider Alex will be 81 years old on July! 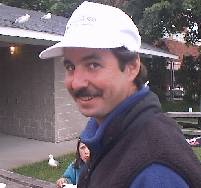 The race committee shortened the distance for the second race as the wind continued to die. By the time Class D had reached the first windward mark the wind was now from the northeast and the race turned into a reaching parade with few positions changing after the first leg.

A great party at the sailing center followed the race with many of the crews staying for the results and trophy presentation. On a sad note, Chiott Marine, the event’s sponsor for the past six years, is closing its doors after 132 years. Barbara Francis, the owner of Chiott Marine, has been a loyal supporter of racing for many years. Thanks Bibs for six great years at the Chiott Marine Challenge!